Since becoming a mother, I've found it increasingly difficult to work on longer thought/opinion pieces for this blog. (And let's face it, my track record in posting essays pre-motherhood was never great.) Nevertheless, I still often think about film. I even try to watch them every now and again (while the kiddo is napping). So, without the time to actually sit and write these days, but still desperate to somehow memorialize my film-related thoughts, I have often used Twitter to send these thoughts and opinions out into the ether. (Thanks, social media.)

Twitter has been great for me in this regard, but there are still some things that simply cannot be fully expressed in one hundred forty characters or less. So I've decided to use this site to file away some of these lengthier reflections under the label, "Quick Note." Here's my first: 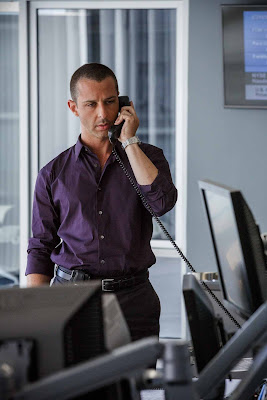 Every so often, a character actor emerges in a more exposed role in a large motion picture; and it turns out that he/she has been quietly building an impressive filmography all along. It took The Big Short for me to finally notice Jeremy Strong. Everyone in this film is great, but Strong's performance truly stood out-- enough that I found myself Googling and IMDb-ing him in the office this morning. His screen presence is remarkable. There is an understated coolness about him, an ease in his physicality that belies the great control and intensity with which he performs his role. And while, again, he plays a supporting character, Vinnie Daniel, to Steve Carell's lead, Mark Baum, Strong is the even-tempered anchor for the ensemble in which Carell is allowed to bluster about, rant, rave, and ultimately shine. I'll be looking out for (and forward to) Strong in future roles.